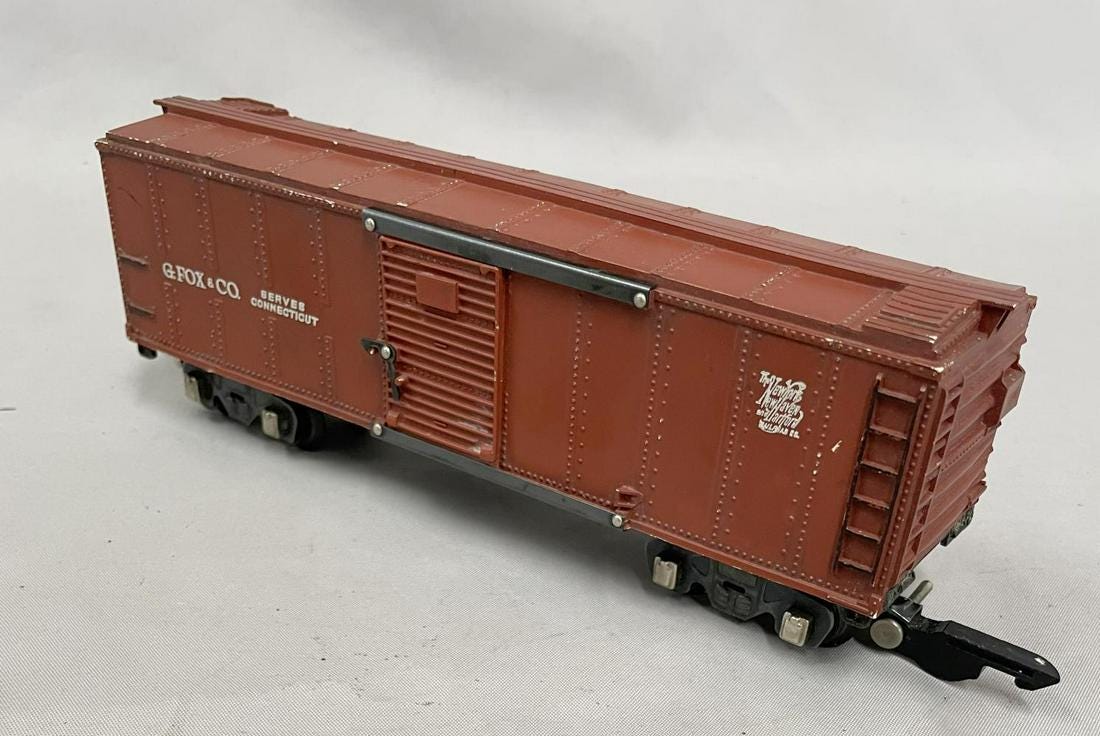 "What is normally an off-month for us turned into a two-day gangbuster sale, with record prices realized in all areas of toy trains," said Philip Weiss, the owner of Weiss Auctions. "There were 498 lots of trains in total, and all 498 sold, most for above estimate and some even multiple times the estimate. Toys did well, too, but trains right now are so hot we have more auctions planned."

The American Flyer G. Fox & Co. boxcar is one of the most desired trains a collector can own. The price realized for the one sold was a new record. "It's the Holy Grail for American Flyer collectors for sure, and the winning bidder had been trying to get one for the last thirty years," Weiss said. "It was a respectable example, Tuscan painted on white mold with nice lettering."

Following are additional highlights from the trains auction. All prices include the buyer's premium. Internet bidding was provided by LiveAuctioneers.com and Proxibid.com.

What is believed to be the rare, handmade factory production of Lionel's 1805 Land, Sea and Air Attack set, used as cover art for the 1959 advanced catalog, made $8,700. Also, a Lionel 6557 reverse number train car, dark chocolate brown with a white smoking stack, just the second one Weiss Auctions has ever seen, the chassis unrun, finished at $4,680.

A scarce, boxed Lionel 9U electric boxcar, standard gauge, second issue kit version, fully assembled and with the original steam-type wheels, plus the remaining pieces to a Bild-A-Loco motor, realized $4,440; and a nicely boxed 1939 Lionel 763E semi-scale Hudson, clean and shiny with strong lettering and a 2263W Vanderbilt oil tender, rose to $3,480.

The Day 1 toys auction featured Part 1 of the Jack and Maurice Manoil collection from the Manoil toy archives; Part 1 of a super collection of 175 Russian St. Petersburg soldiers; and many boxed tin toys, battery ops, and pre-war pressed steel vehicles and trucks by Buddy L, Metal Craft, Keystone and Marx, from the Tony Bifano collection.

What would have been one of the star lots of the toys auction actually came up for bid on train day. It was the hard-to-find, boxed AC Gilbert 1951 Atomic Energy Lab, an iconic Cold War-era toy and the first one Weiss Auctions has ever handled. The huge set was packed in a suitcase-style box, all major and minor components appearing intact ($3,600).

Weiss Auctions' next online auction is slated for Wednesday, Sept. 22nd, and will feature Comics, Comic Art, Sports, Disneyana and more. Highlights will include a copy of All American #16 (graded 4.0), plus many graded/ungraded Golden, Silver and Modern Age comic books; and the first Tom Seaver signed team ball and team photo with provenance.

Also featured will be a great selection of graded and ungraded sports cards; more comic art from the estate of Joe Kubert; a just-uncovered Nick Cardy Jimmy Olsen #161 cover, more Golden Age art from the Baily archive; high-end Disney bronzes, porcelains and animation art, with more being added daily. The next sale after this will be held Oct. 6th.

For more information about Weiss Auctions and the firm's calendar of upcoming auctions, visit www.WeissAuctions.com. Updates are posted often.