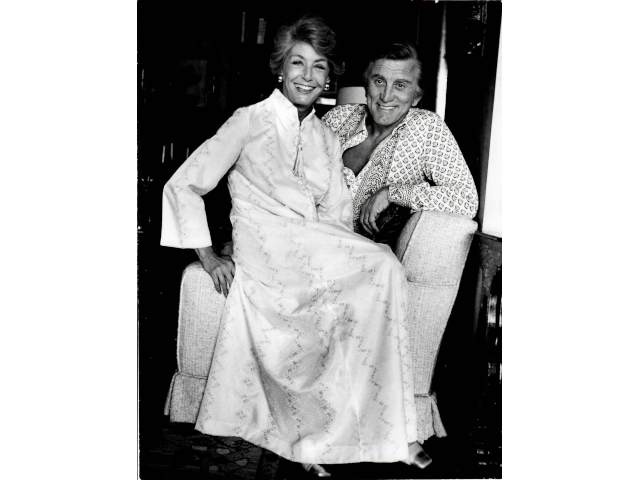 Downtown Los Angeles, CA, USA, April 28, 2022 -- On Wednesday, May 18th, Andrew Jones Auctions will be honored and proud to present, online, property from the collection of Kirk and Anne Douglas to benefit The Douglas Foundation. Over 200 lots of modern art, antiques, tribal works, fine and costume jewelry, personalized accessories, memorabilia, books and ephemera will all be offered.

Before becoming an internationally acclaimed movie star (and the father of actor Michael Douglas), Kirk Douglas endured an impoverished childhood to study at the Academy of Dramatic Arts in New York City on a scholarship to begin his career on the stage. After World War II he took his first major motion picture role in The Strange Love of Martha Ivers in 1946.

Kirk's natural talents in front of the camera led to nearly 60 more films, his favorites among them being Ace in the Hole, 20,000 Leagues Under the Sea, Spartacus, Seven Days in May and Lust for Life, the 1956 film in which he portrays Vincent Van Gogh, for which he was nominated for the Academy Award for Best Actor and won the Golden Globe for Best Actor in a Drama.

Kirk met Anne Buydens, a film publicist, on the set of Act of Love in 1953 and they married a year later. Before joining the film industry, Anne worked in a Paris gallery where she developed a keen eye for modern art. Kirk and Anne Douglas spent six decades building a collection of fine art, antiques and memorabilia that capture the time they shared, their friends, work and history.

The top lot of the sale is L'enfant à l'oiseaux by the celebrated Catalan artist Antoni Clavé. It has a pre-sale estimate of $20,000-$30,000). A monumental abstract sculpture in aluminum by William (Bill) Tarr, from 1963, was displayed at the foot of the couple's own Walk of Fame in the backyard of their Beverly Hills home. It's expected to find a new home for $3,000-$5,000.

The Douglas's tastes were eclectic, from modern art to African Bamum, Bassa and Yaure masks, to Asian works such as a Chinese blue glazed junware censer (est. $800-$1,200) and a pair of monumental Chinese white marble models temple lions that greeted guests at their front door.

Their extensive library comprised folios including a signed copy Marc Chagall's The Jerusalem Windows, 1962, in a custom Asprey Morocco leather binding (est. $4,000-$6,000), academic artist's monographs, a collection of signed works by renowned photojournalist and personal photography of Picasso and David Douglas Duncan, and first editions highlighted by a signed copy of Tennessee Williams' Glass Menagerie, as well as gifts with touching dedications.

Longtime philanthropists Kirk and Anne started The Douglas Foundation in 1964, which has since supported many institutions focused on the arts, healthcare, education and women and children's wellbeing. The Douglas Foundation has donated nearly $120 million to the Children's Hospital Los Angeles, the Motion Picture & Television Fund (MPTF), and The Entertainment Industry Foundation's Women's Cancer Research Fund, as well as other worthy organizations.

For more information about Andrew Jones Auctions and the sale of property from the collection of Kirk and Anne Douglas on Wednesday, May 18, please visit www.andrewjonesauctions.com.