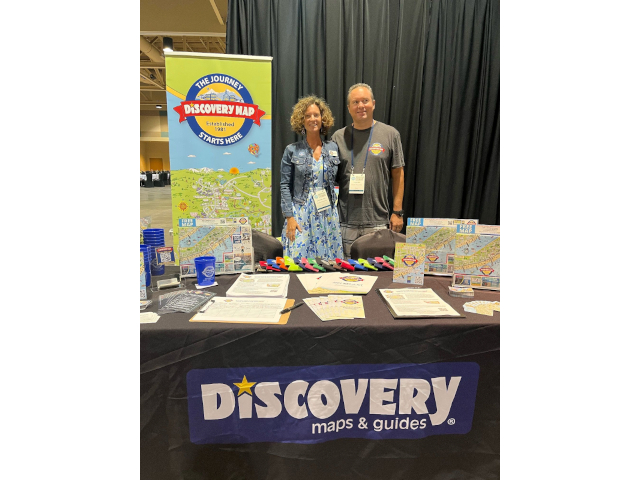 "We first saw Discovery Map in Puerto Rico while we were there for a friend's wedding. We've owned a vacation rental property in Galveston since 2010 and thought Discovery Map would be a big hit on the island," said Jeanna, who works full-time at the University of Texas Medical Branch-Galveston as a senior quality assurance analyst for research studies. "So, when we got back, we approached businesses with the map and asked them if this is something they would like to see in Galveston. There was an overwhelming response. More than 50 businesses agreed to advertise on the map if we purchased the franchise. That was enough for us. We called Peter and the team at Discovery Map and the rest is history."

"Troy and Jeanna are deserving winners of our Rookie Franchise Owner of the Year honors. I'm not sure we've ever had new franchise owners get off to such an amazing start," said Peter Hans, president of Discovery Map. "What's really impressive about the Leeks is their old school approach, literally going door-to-door to gauge interest."

Added Hans, "They've also added some new twists to the Galveston map, incorporating people known to the locals within the map, like the Catamaran Sailor, the guy who runs with a Chihuahua on his shoulder and other local characters. These local elements give the map appeal to both tourists and residents."

For being named winners of the Discovery Map Rookie of the Year Franchise Owner, the Leeks will receive a commemorative plaque and a $500 credit toward the publishing of the next edition of their map.

Discovery Map has more than 130 maps across the U.S. and Canada. It is the charge of franchise owner to sell advertising space on the map and the Discovery Map online version, the WebMap, available at discoverymap.com. The typical franchise owner will publish a printed map once per year.

Discovery Map International is the country's leading provider of curated guides to top tourist destinations, cities and towns throughout North America. The distinctively colorful, hand-drawn maps are a favorite of travelers for navigating local dining, attractions, businesses, cultural experiences, ski destinations - and even the best locations to take selfies. Discovery Maps can be found in local hotels, restaurants, shops, visitor information centers and other participating venues, and at discoverymap.com. Named by Forbes as "one of the best franchises to buy" in 2015, Discovery Maps International is headquartered in Waitsfield, VT, in the heart of the Green Mountains.