Objects from World Wars I and II and The Modern Era to be Auctioned Online Sept. 29 by Bruneau & Co 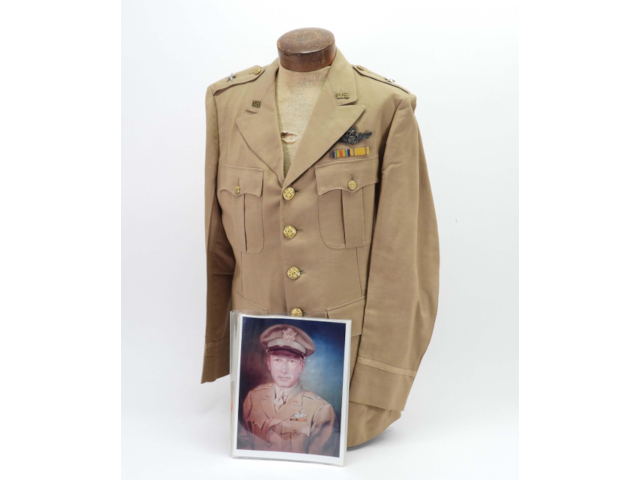 The online-only auction, beginning promptly at 6 pm Eastern time, is packed with 265 lots of historic objects from World Wars I and II and the modern era. These include flags, uniforms, bayonets and an array of iconic arms of both World Wars for the discerning collector. But not to worry, the catalog promises something for the novice collector as well as the advanced dealer.

"A large portion of the auction was built from a single-owner collection of fine long arms, pistols, and revolvers," said Joel Bohy, the director of Bruneau & Co.'s Arms & Militaria department. Mr. Bohy added, "There will be a selection of bayonets, fighting knives, scopes, and unusual wartime bring-back articles, to include porcelain, glassware, flags and propaganda."

There is also a single owner collection of officers' tunics and uniforms and a collection of German Hitler youth articles including, clothing, badges, books, photographs, helmets, hats, insignia, and medals. This will be just the fifth online-only Historic Arms & Militaria auction for Bruneau & Co., and in that brief time it has made a major impact in a crowded field.

The World War II A-2 leather flight jacket from the U.S. 23rd Bomb Squadron features a 5th Bomb Group painted insignia on the left chest depicting a skeleton in a flight cap holding a bomb, and a banner marked "23RD BOMB./IN HOC SIGNO VINCES". The jacket is shown in Jon A. Maguire's book Art of the Flight Jacket: Classic Leather Flight Jackets of World War II (Schiffer Military/Aviation, 1995), and should gavel for $800-$1,200.

General Frederick Von H. Kimble's summer-weight, worsted wool tunic has "SMILO" brigadier general stars on each epaulet, a U.S. insignia on the collar, a sterling "Myers" command pilot pin back wing on the left breast, with a two piece sew-on WWI victory and American defense bars, marked on the inside right front "Vo. H: 7267. K". The lot comes with a research folder on Kimble and is expected o change hands for $300-$500.

Kimble (1895-1978) graduated from West Point June 12, 1918. He became an infantry instructor at Camp Benning, Ga., and in 1922 he entered the air service. He served in various commands until 1942, when he became the commanding officer of the Tuskegee Army Advanced Flying School in Alabama. He retired a brigadier general in 1953. He is mentioned in the book Black Knights: The Story of the Tuskegee Airmen (Pelican, 2001).

A Canadian Ross M-10 straight pull rifle and bayonet, circa 1916, .303 caliber, having a walnut stock with a round cartouche on the right side of the butt marked "QUEBEC", also marked "III./3/1916/KZ", with a blued finish, marked on the receiver ring "ROSS RIFLE CO./CANADA/M-10/PATENTED" with proof marks, and a sharpened bayonet and scabbard, should hit $400-$600. The barrel is 30 ½ inches; overall length is 50 ½ inches.

A cotton World War II Japanese flag with Rising Sun graphic, 41 inches by 49 inches, with the 2nd Marine Division insignia painted on the red center and marked "U.S. MARINE CORPS/1st Battalion - 2nd Marines/Guadalcanal/Tulagi/Tarawa" and "Saipan / Tinian /Okinawa/Second Division", signed on the white background by 45 marines with various duty stations and areas served in the South Pacific, has an estimate of $200-$400.

A Finnish model 39 bayonet and scabbard with walnut grips, a steel guard marked with an "S", a steel blade marked on one side of the ricasso "SK.Y", with maker's mark on the other side, and a leather scabbard marked "SK.Y" with steel reinforcement, is expected to change hands for $200-$400. The blade is 7 ¼ inches long; overall length is 11 ½ inches.

Internet bidding will be facilitated by LiveAuctioneers.com, Invaluable.com, Auctionzip.com, bidLIVE.Bruneauandco.com and the mobile app "Bruneau & Co." on iTunes or GooglePlay.

A preview of all the items will be held by appointment only in the Bruneau & Co. gallery on the date of sale, Thursday, September 29th, from 9 am to 4 pm Eastern time. To schedule an appointment, please call (401) 533-9980 or send an email to info@bruneauandco.com. The Bruneau & Co. Auctioneers gallery is located at 63 Fourth Avenue in Cranston, RI 02910.