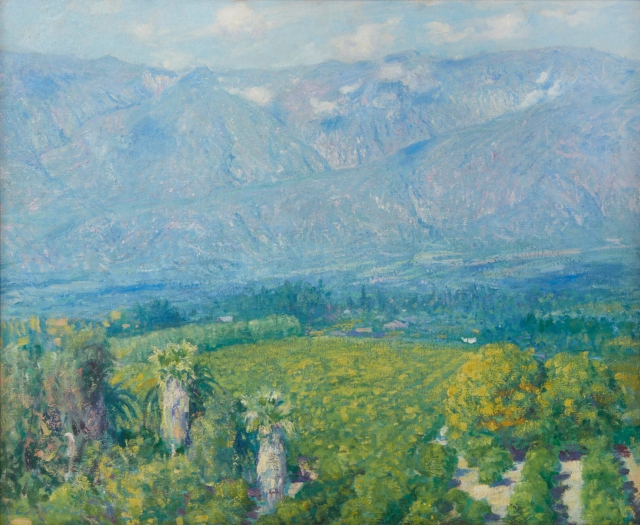 Downtown Los Angeles, CA, USA, January 18, 2023 -- Bidders nationwide and around the world responded enthusiastically to the collection of Jack and Ellen Phillips of San Diego, California, which blasted through its pre-sale estimate by more than one and a half times, totaling $1.487 million and 'White Glove' status in an online auction held January 15th-16th by Andrew Jones Auctions.

The auction was a time capsule collection of important California plein air paintings, Americana, clocks, fine silver, antiques, Native American works and decorations amassed over fifty years by the Phillipses. Jack, a Naval engineer, and Ellen, a schoolteacher, were high school sweethearts in Colton, Calif. They married in 1961 and a year later began their collecting journey together.

"The busy pre-sale preview brought in a host of new faces to our galleries as well as established buyers, collectors and art and antique aficionados who braced the unusually soggy Los Angeles weather," said Andrew Jones, the president and CEO of Andrew Jones Auctions, based in Los Angeles. "Clients remarked it was the best local private collection they had seen in decades."

The two-day auction featured over 500 lots and was led by paintings from acclaimed California Impressionists Granville Redmond (1871-1935) and Guy Rose (1867-1925). Redmond's oil on canvas titled Rolling hills with California poppies and Rose's oil on canvas titled View from Arroyo Terrace, Pasadena each sailed past estimate to post identical selling prices of $237,500.

Also offered were works by plein air artists as well as Hudson River School, genre and marine painters. These included an oil on board ambient View of the Hudson River by Henry Ary (American, 1807-1859) that made $17,500. Also, a wonderful oil on pine panel domestic scene of Figures at a table by Lilly Martin Spencer (English/American, 1822-1902) finished at $7,500.

Also up for bid were artworks by Marion Kavanagh Wachtel, Elmer Wachtel and William Wendt; all surpassed their pre-sale estimates. Following are additional highlights from the auction, which attracted thousands of online registrants who bid on AndrewJonesAuctions.com, LiveAuctioneers.com and Invaluable.com. Hundreds of phone and absentee bids were also taken.

An early Tiffany Studios bronze and Favrile glass oil lamp fetched $5,000.  A Navajo pictorial rug achieved $4,250.  A charming Vienna cold painted bronze model of a magpie by Franz Bergman sold for $1,625.  The estate jewelry was highlighted by a selection of watches, including a Patek Philippe 18K gold wristwatch, which sold for $4,250. Also, a whimsical gold charm bracelet made $4,500.

After spending time in Texas and Washington D.C., the Phillipses returned to California and found their dream home on Mt. Helix, in La Mesa, in the 1970s.  There, they enjoyed spending time with friends and neighbors, their dogs, books and building their collection of fine art and antiques.  Their academic nature and inquisitiveness allowed the couple to explore and research to make shrewd acquisitions by understanding each item's history.

Next up for Andrew Jones Auctions is the over 400-lot DTLA Collections & Estates auction on February 1st, including, art, antiques, design and accessories; followed by the signature Design for the Home and Garden auction on February 12th, featuring the estate of Shirley Baskin (the co-founder of Baskin Robbins and KCET television), an exhibited artist in her own right.