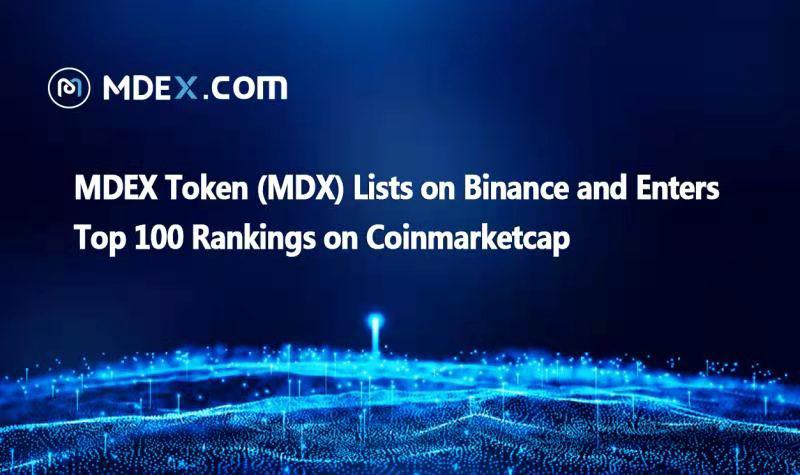 Singapore, May 27, 2021 -- The leading decentralized cross-chain trading protocol MDEX.COM has pulled off quite the coup, with its MDX token listing on top exchange Binance and its entry into the Top 100 rankings on Coinmarketcap.

In the last 24 hours, the MDX trading volume is USD 87 million and $MDX is currently priced at USD 1.89. Its live market cap is USD 780 million and besides Binance, is presently trading on Huobi Global, Gate.io, MXC.COM and others.

Leading CEX (centralized exchange) Binance needs no introduction. Formed in 2017, Binance is the largest cryptocurrency exchange in the world in terms of trading volume.

This is not the first collaboration between Binance and MDEX. On April 8, the previously HECO-based DEX integrated the Binance Smart Chain (BSC) network and within two hours, reported a TVL (Total Value Locked) of more than USD 1.5 billion.

MDEX's successful launch on BSC and its subsequent, massive trading volumes are integral to the Binance decision to list the $MDX token on its trading platform. $MDX can be traded under the following token pairs - MDX/BTC, MDX/BNB, MDX/BUSD and MDX/USDT.

Can $MDX Replicate its DEX Success?

An AMM (automated market maker) DEX on both HECO and BSC, MDEX aims to create a high performance DEX ecosystem as well as provide multi-chain support.

Back in February - March, just slightly over a month after it launched yield farming on its platform, MDEX managed to surprise the entire DEX space when it captured major market share, beating industry titans like Uniswap and Sushiswap. Implementing a dual mining strategy that includes both liquidity and transaction mining, the DEX has continually managed to sustain its lead in the market.

Traders are keeping an eye on the MDX token should things move fast. The maverick token is currently on more than 90,000 watch lists on Coinmarketcap.

For more info about MDEX, visit the official website: https://mdex.com/#/