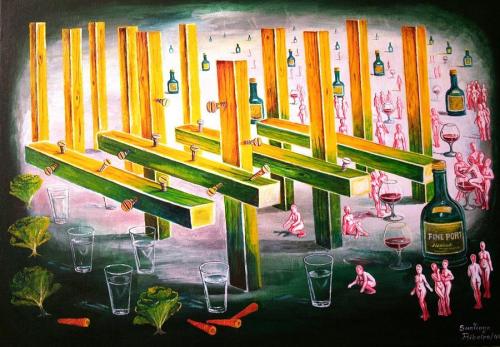 Evora, Portugal, June 19, 2021 -- The city of Évora in Portugal these days is the center of contemporary surrealist art, a wonderful UNESCO heritage location, which houses the paintings of Santiago Ribeiro and hundreds of other artists he has gathered around him. The event marks its first presence in this Alentejo metropolis this month, following the pandemic.

The initiative is from the company MatosCar, an automotive group present in the Portuguese cities of Guarda, Fundão, Castelo Branco, Portalegre, Évora and Beja, official representatives of 24 brands.

This time the exhibition will be permanent (until 11 July) because the entrepreneurial group has decided to buy the works that are about a dozen will be exhibited in the new facilities in Évora and will be able to be seen by many thousands of people.

A Video that Shows The Surprising Implications of Ribeiro's Surrealism

The exhibition is accompanied by images from a video promoting Ribeiro's surrealist art made by the Sicilian poet A.S.A.S prize Vincenzo Calì, the journalist and curator art of Campania Annalina Grasso and the Roman actor Maurizio Bianucci. The video promotes the exhibition of the Portuguese artist, founder of the New Surrealism Now Movement, of global reach.

The video, which currently has more than 100,000 thousand views on instagram thanks to the persuasive and mysterious voice of the Italian actor Maurizio Bianucci who took part in important and successful series such as Suburra, in numerous theatrical representations and RAI fictions and who declaims the poem in the Italian version entitled "Profluvi" by Vincenzo Calì, while the English version "Flows" is played by Annalina Grasso, creator together with Calì of this cultural initiative which is enjoying success also abroad.

The Sense of Ribeiro's art

Art with the support of technology helps people to do it, even at a distance, showing them how similar they can be in this complicated moment and how the human mind is not actually reducible to a mere mechanism with algorithmic functioning on the basis of which they act without conscience. and discernment and them are reflected in the protagonists whether they are hominids or figures, in the brightly colored canvases by Ribeiro.

The hypothesis that the important choices depend on a person's conscious awareness, whether it is a neuronal process, not yet well specified, or something else, cannot be falsified, this is the basic message of the video dedicated to surrealism by Santaigo Ribeiro.

The Portuguese artist, born and living in Coimbra, has shown his artworks with great regularity in Portugal and in many other countries. Santiago, the mentor, and promoter of the largest exhibition of surrealism in the 21st century in the world, the International Surrealism Now, already has numerous presences around the planet. He is the driving force and the promoter of the international project "Surrealism Now", which started in 2010, organized by the Bissaya Barreto Foundation. Santiago Ribeiro has publicized and promoted his work on the internet, through social networks and blogs, thereby having received numerous invitations to exhibit his art in various parts of the globe."