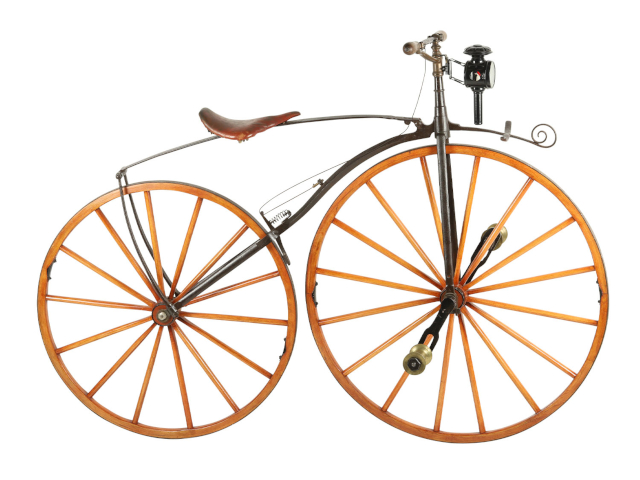 Both auctions are online-only and will have a start time of 9 am Eastern time. The Bryan Beatty collection of toys and communication-related memorabilia includes a well-rounded offering of cast iron and tin litho toys from the Victorian to the Atomic era. Mr. Beatty's collection also includes many radios, microphones and typewriters, with examples spanning the 20th century.

"The Bryan Beatty collection is a brand that will outlive this auction," predicted Ethan Miller of Miller & Miller Auctions, Ltd. "His guiding principle can be summed up in these three words - condition, condition and condition. Unlike most university professors, Bryan used the breaks between lectures to search for toys and nostalgia. He collected like he taught - academically."

Scott Vanner's collection of Canadian breweriana includes a large assortment of beer trays and assorted advertising from the 1890s to the 1940s. A generous offering of live steam models will also be sold, the highlight being a finely engineered 7 ¼ inch gauge steam locomotive. Other categories in the collection that will be sold include advertising signs, bicycles and comic books.

The items in Mr. Vanner's collection are "just the way collectors like them," Mr. Miller said - "one hundred percent fresh to the market." The 7 ¼ inch gauge steam locomotive could easily end up being the top lot of the two days, as it carries a stout pre-sale estimate of $15,000-$20,000 (all prices quoted in this report are in Canadian dollars). It previously sold at Christie's in 1985.

The steam locomotive is a well presented 7 ¼ inch gauge model of the Great Western Railway 4-6-0 locomotive and tender No. 1011 ("County of Chester"). It was rebuilt and reboilered by F. West and Lee Green and comes with a brazed superheated copper boiler with fittings, including water and pressure gauges, safety, blower, twin injector, whistle, clack and blowdown valves.

Two Canadian steam engine models from very different eras carry identical estimates of $2,000-$3,000. One is a model of a 'Southern' heavy-duty rocking valve mill engine, with continuous rope belts, designed and built by H.A. Sharrar in 1971. It was a "Best Steam Display" winner at the Milton steam show. The other is a highly detailed scale model of the steam engine that ran machinery for the Dominion Organ & Piano Co. (Bowman, Ont.), built by R. Fishleigh in 1890.

Other noteworthy Day 2 offerings include a Worth and Martin (Toronto) one-cent bull's head perfume dispenser ("Take the bull by the horns!"), made in 1902, solid brass with a glass mirror and able to accept large Canadian cents (estimate: $6,000-$9,000); and a Wayne Model 60 American made Chevrolet gas pump dating to the 1940s, 92 inches tall and professionally restored to Chevrolet, including paint and reproduction globe lenses (estimate: $6,000-$9,000).

A Wurlitzer Model 1015 jukebox, made in America in 1946, has an estimate of $6,000-$8,000. The Model 1015 is one of the most iconic jukeboxes ever made. This one is a fine, functioning example and comes with 24 period rock 'n' roll records. Also, an 1869 French style Boneshaker bicycle with a painted iron frame, wood rims and professionally restored wheels, is expected to speed away for $3,000-$3,500. The rear brake is activated by twisting the handlebars forward.

A Molson's Beer clock, made for the French-Canadian market in the 1930s, porcelain with a screened metal clock dial marked "Made in Germany", should bring $4,000-$6,000. Very few porcelain advertising signs were appointed with high quality mechanical clocks. Also, a Black Cat Shoe Polish lithographed tin clock, made in Canada in the early 20th century, marked "MacDonald Mfg. Co. Limited, Toronto", non-functioning, has an estimate of $2,000-$3,000.

A Miller High Life Beer two-sided porcelain hanging sign, made in the 1930s and originally designed to accommodate bands of neon surrounding the perimeter, 35 ½ inches by 46 inches, is expected to reach $3,000-$5,000; while a circa 1920s mechanical commercial cigar humidor showcase, made in America of quarter sawn oak with etched plate glass panels and nickel-plated trim, tagged "The Loudon Cigar Case" with various patent dates, should realize $3,500-$6,000.

Back to Day 1. One item certain to be a hit with bidders (but not part of the Beatty collection) is a Hillerich & Bradsby Louisville Slugger baseball bat signed in blue sharpie marker by Hall of Fame legend Mickey Mantle (estimate: $2,000-$2,500). Included is an official 1992 MLB photo of Mantle and a 2001 letter of authenticity from PSA/DNA that's signed by James J. Spence, Jr.

From the Beatty collection, a 1950s-era American RCA Type 77 DX ribbon microphone made from brushed steel and chrome, in the rare and iconic "pill" design, mounted to a contemporary powder coated base, should command $2,000-$3,000. Also, a circa 1940s/'50s RCA Type 91B microphone and an MI4092 desk stand, having a powder coated and brushed chrome base and mounted to a rare, correct base, 9 inches tall (mike on stand) has an estimate of $800-$1,200.

Internet bidding for the 875-lot auctions will be facilitated by LiveAuctioneers.com, as well as the Miller & Miller website: www.MillerandMillerAuctions.com. Bidders can tune in to the live webcast on both days to watch lots close in real time. Phone and absentee bids will be accepted.

To learn more about Miller & Miller Auctions, Ltd. and the back-to-back auctions scheduled for September 11th and 12th, at 9 am Eastern time both days, visit www.MillerandMillerAuctions.com. Updates are posted frequently.