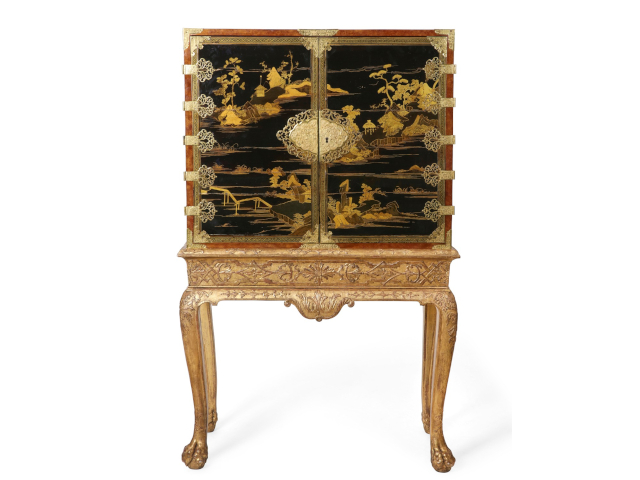 Downtown Los Angeles, CA, USA, December 16, 2021 -- Andrew Jones Auctions had great expectations going into Part 2 of the John Nelson Collection, held December 12th. After all, Part 1, in October, more than doubled its presale estimate to total $1.6 million. Part 2 did not disappoint, as 18th century European style from England to Italy led the 271-lot white glove auction to a $1.1 million gross.

"We welcomed many new faces to our gallery for the busy auction preview for Part II of the John Nelson Collection," said Andrew Jones, president and CEO of Andrew Jones Auctions. "The word was spreading about the rare and unique works being offered, and collectors didn't want to miss out. It was like turning back the clock to the halcyon days of antique auctions."

Following are highlights from the auction. All prices quoted here include the buyer's premium.

The top lot of the day was an elegant George I chinoiserie decorated cabinet on later stand that fetched $27,500, almost seven times its presale estimate. Also, an impressive pair of 20th century Louis XVI style gilt bronze and cut glass 16-light chandeliers lit up the room for $23,750, while a monumental mid-18th century Italian rococo giltwood mirror found a new home for $12,500.

The future series of sales for The John Nelson collection will be a celebration of the unerring eye of a more than 50-year Los Angeles design and antiques institution - and the man behind John Nelson Antiques. The collection features Chinese porcelain, paintings, French decorative arts, sculpture, antiquities, Grand Tour objects, European furniture, mirrors, chandeliers and more.

Andrew Jones Auctions' next event will be DTLA Collections & Estates to be held Wednesday, January 12th, 2022. The sale will consist of 350 lots of antiques, design, Chinese works of art, accessories and more. Part 3 of the John Nelson Collection will be held on February 20th, 2022.