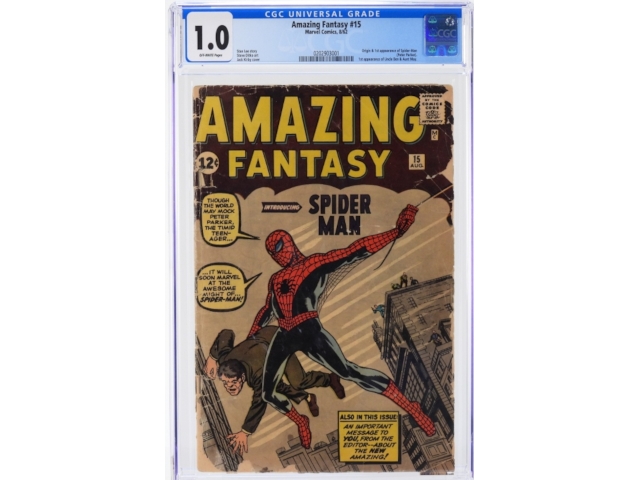 The top lot of the 545-lot sale was a copy of Marvel Comics' Amazing Fantasy #15 from August 1962, featuring the origin and first appearance of Spider-Man and the first appearance of Uncle Ben and Aunt May. Despite its CGC grade of 1.0, bidders saw it for what it was: a great entry-level copy to the undisputed fan favorite book from the Silver Age of comics. It sold for $25,000.

Marvel Comics, quickly realizing it had a winner on its hands, gave Spider-Man his own comic in March 1963 with Amazing Spider-Man #1. The book featured the first appearance of J. Jonah Jameson and Chameleon, the first Fantastic Four crossover. It also retold the origin of Spider-Man. The copy sold, graded CGC 2.0, had tape on the cover and inside, but still rose to $11,562.

"The comic market closed out 2021 strong," said Travis Landry, a Bruneau & Co. auctioneer and the firm's Director of Pop Culture. "It shows great promise for what New Year's Day might hold for us. It's not too often you see comics like that coming up for auction." He was referring to a small but potent 20-lot New Year's Day Premier Comic Auction slated for Saturday, January 1st.

Following are additional highlights from the December 11th auction. Internet bidding was provided by LiveAuctioneers.com, Invaluable.com, Bidsquare.com, bidLIVE.Bruneauandco.com and the mobile app "Bruneau & Co.". All prices quoted include a 25 percent buyer's premium.

"While it was not the largest section by lot count, the collection of early tin toys was fantastic," observed Kevin Bruneau, Bruneau & Co's president and an auctioneer. "They all came out of one estate in Ware, Massachusetts. They were the lady's mother's toys. The Fischer clown was one toy we might not see again for a very long time." Again, bidders ignored condition issues.

The rare, early 20th century German Fischer tin clown tricycle windup toy, graded C8, went for $2,875, despite not being in working condition. "The paint presented very well, with only minor areas of scratching," Mr. Bruneau explained, "while the tin lithography showed slightly darker from age. Otherwise, it was a great example of a scarce and early toy."

The upcoming January 1st New Year's Day Premier Comic Auction may only contain 20 comic books, but don't let the size fool you. The books are from a single-owner Midwest collection (Bruneau & Co. sold the bulk of the collection this past year); what remains are his last, final comics, to be sold without reserves. The sale will be held online and live in the gallery.

The second is a copy of Fantasy Four #1 (Nov. 1961), graded CGC 8.0, the comic that arguably brought the entire Marvel Universe into existence. Featuring the origin and first appearance of the Fantastic Four and Moleman (Marvel's first-ever superhero team), the book sports one of the most famous covers by Jack Kirby in comic history. This is a must-have for dedicated collectors.

The third is a copy of Amazing Fantasy #15 (Aug. 1964), graded CGC 5.5, featuring the origin and first appearance of Spider-Man and the first appearance of Aunt May and Uncle Ben. The cover art is a collaboration between Jack Kirby and Steve Ditko, helping it land in the number one spot atop Overstreet's list of Top 50 Silver Age Comics. It's a true Holy Grail collectible.

A preview is available by appointment the week of and day of sale, with doors opening at 9 am Eastern time.  The auction will begin at 12 noon. Bidding is available via in-person, absentee, telephone or Internet, with a 20% buyer's premium (or 18% with cash, check or wire transfer).

Internet bidding will be facilitated by LiveAuctioneers.com, Invaluable.com, Bidsquare.com, bidLIVE.Bruneauandco.com and the mobile app "Bruneau & Co." on iTunes or GooglePlay.