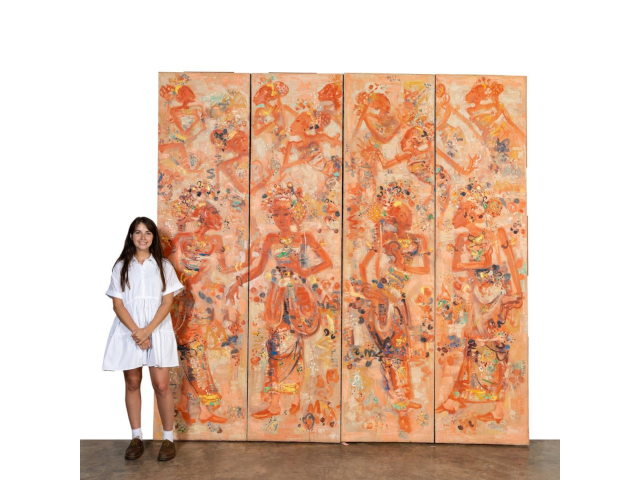 Balinese Dancers came to the auction with a modest estimate of $500-$700, but bidders quickly blasted through that and then some. The four-panel series depicted women in the foreground in different poses and a group of women in the background dancing. The unframed work was artist signed and dated at the lower right panel and was consigned out of a private Atlanta collection.

Session 1, on Thursday, August 25th, featured 362 lots of Asian and ethnographic arts. Session 2, the following day, contained 396 lots of Mid-Century Modern and modern art and design, jewelry and silver. The final session, on August 27th, had 529 lots of period antiques and fine art. By the time the last lot had finally found a new home, the auction totaled a robust $1.39 million.

Following are additional highlights from the auction. Around 900-1,000 people bid on Ahlers & Ogletree's bidding platform, bid.AandOAuctions.com, as well as on LiveAuctioneers.com and Invaluable.com. Phone and absentee bids were also taken. Live, in-person previews were held in Ahlers & Ogletree's Atlanta gallery. All prices quoted include a 25 percent buyer's premium.

Balinese Dancers may have been the top lot of Session 1, but close on its heels was a Tibetan polychrome painted wood door depicting a guardian spirit with a tiger on a chain in a celestial landscape. The 58 ½ inch by 40 inch door was attached to a red painted wood frame with red metal hardware. Again, the estimate was modest ($200-$400), but the door sold for $17,500.

Slightly more was paid for the pair of Chinese blue and white porcelain phoenix tail vases, 17 inches tall, that finished at $18,750 (against a pre-sale estimate of $1,000-$2,000). The figural Fengweizun vases were each decorated with male figures and bats in a landscape and resting on wooden stands. One had a character ink stamp but the pair were otherwise apparently unmarked.

Also making the Session 1 winner's circle was a Japanese Meiji period (1868-1912) Satsuma vase, about 23 inches tall and nicely decorated in enamels and gilt ($8,750). The body featured a meticulously painted court scene on one side and cherry blossoms and a lake in the background of the other side. The mark read, "Made by Ryuzan in the Kingdom of Satsuma Imperial Japan."

Two Session 2 lots fetched identical prices of $18,750. The first was a large pair of Aspen Art guardian lions, both 56 inches tall. The cast bronze garden sculptures were modeled as opposing sitting lions and each had a pleasing patina. The lot easily bested the $4,000-$6,000 estimate.

The second was an untitled paint splatter work by Sam Francis (Calif., 1923-1994), one of two Sam Francis paint splatter paintings in the auction. Untitled SF 78 was an abstract monotype acrylic and mixed media on laid paper, with geometric shapes and yellow stripes. The painting was signed by Francis lower right and housed in a frame measuring 37 ¾ inches by 32 ½ inches.

Two other Session 2 lots also posted high prices realized ($13,750). One was an untitled bronze sculpture by Frank Fleming (Ala., 1940-2018) of a turtle with a lizard on its back and holding an umbrella with a sitting frog. The 10 ¼ inch tall sculpture was signed in mold to the underside.

The other was a pair of Versace gilt bronze mounted green marble amphora form urn "Leone" double socket table lamps. Each had an artichoke finial, black gold "Barocco" shade, double arms and laurel bands to the bodies, and Medusa heads and Greek Key bands to the base.

Rounding out Session 2 was an 18-light iron and bronze chandelier by Naos Forge, 88 inches tall and unmarked ($11,875). The custom made "Verona" chandelier was in the Renaissance taste, having a scrolled three-tier frame with applied foliate decoration.

On to Session 3, where a bronze and marble bank table acquired by Amadeo P. Giannini, president of the Bank of Italy (now known as Bank of America) changed hands for $11,250. The table resided in the lobby of The Bank of Italy in San Francisco for years.

An oil on Upson board painting by one of the legendary Florida Highwaymen - Harold Newton (1934-1994) - depicting palm trees and pelicans on a lovely day, artist signed lower right and measuring 23 inches by 17 inches (sight, less frame), commanded $7,500.

Ahlers & Ogletree's next big event will be a two-day Fall Fine Estates & Collections Auction planned for the weekend of October 28th-29th. Watch the website for details.