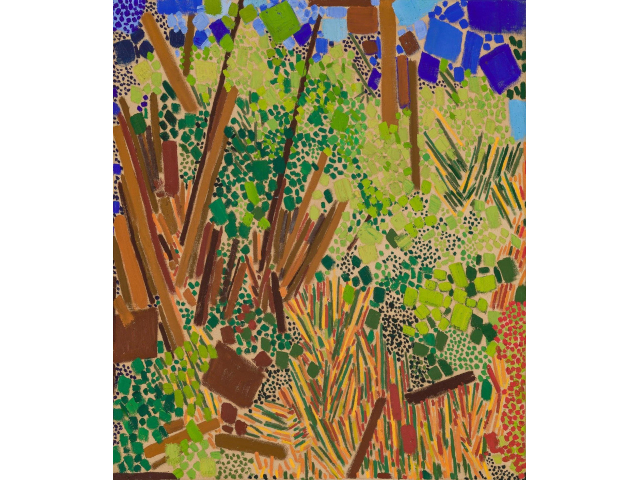 Leading the sale was a 1963 painting by Monhegan artist Lynne Mapp Drexler. Drexler's prices have skyrocketed in recent years and the team at Shannon's had the knowledge to offer this painting at the most advantageous time for their client. Untitled from 1963 sold for $450,000 after lively online and phone participation.

A painting by Scott Kahn who, like Drexler, has recently benefited from market enthusiasm, sold for $212,500. Shannon's reports global bidding on the painting titled The Woods from over six countries and multiple states.

Historical American paintings were led by Thomas Moran's sublime, Turner-esque view of Venice, a 20 inch by 30 inch canvas, which sold for $162,500. A stellar price was achieved for another European scene by an American artist, Robert Vonnoh, titled Beside the River (Grez), that sold for $68,750.

A masterful painting by 19th century landscape painter, William M. Hart, doubled the high estimate, selling for $62,500. The scene, a luminist view titled Sun Setting Over Mountain Stream, was dated 1864. A coastal view of Maine by William Trost Richards sold for $60,000, while a portrait of a young gentleman by William Merritt Chase sold for $52,500.

Of Shannon's remarkable success despite increasing competition for quality consignments, owner Sandra Germain commented, "Our clients recognize our commitment to customer service, our quality offerings and enjoy working with us as a team. We are excited to welcome an increasing number of new clients with each sale and are looking forward to our future success."

Shannon's has positioned itself as a leading outlet for quality American art from all periods. This most recent auction is proof of its success in the American art market. Shannon's accepts consignments year-round. To inquire about a possible consignment, or to sign up for their mailing list, please visit shannons.com.