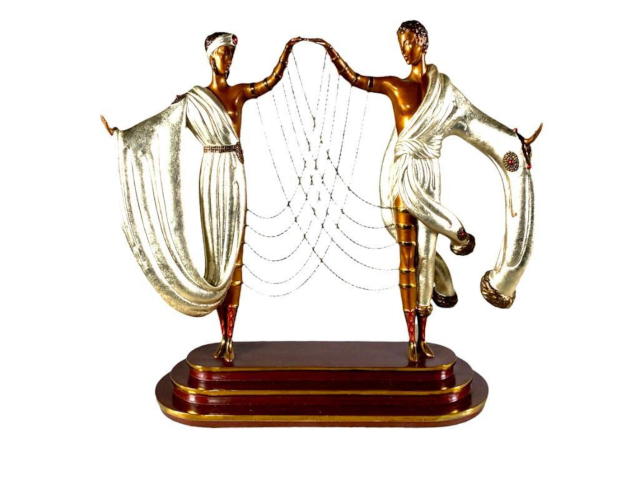 Beachwood, OH, USA, June 10, 2022 -- An abstract acrylic on canvas collage and enamel on aluminum work by African American artist Sam Gilliam (b. 1933) sold for $67,650 in an online-only May Modern auction held May 28th by Neue Auctions. The work, titled Pantheon #5, was created in 1984. It was an exuberant, highly textured and complex composition, executed with deft craftsmanship.

The piece, impressive at 85 inches by 55 inches, was signed verso and titled on the stretcher and sold within its $50,000-$80,000 estimate. It was easily the top achiever in just the third annual May Modern sale for Neue Auctions, one that featured a fine collection of modern works of printwork, original paintings, pottery, sculpture and classic modern furniture by name designers.

Following are additional highlights from the 262-lot auction. Internet bidding was facilitated by LiveAuctioneers.com, Invaluable.com and Bidsquare.com. Phone and absentee bids were also accepted. All prices quoted include a 23 percent buyer's premium.

Works by artists with instant name recognition were plentiful and included the following lots:

A gorgeous watercolor on illustration board by Viktor Schreckengost (American, 1906-2006), titled Edge of Night, signed lower right and matted and framed to a size of 39 inches by 48 ½ inches, reached $3,321; while an equally beautiful watercolor op paper by William Sommer (American, 1867-1949), titled Landscape with Road and Tree, Houses and Clouds (1936), signed and dated and matted and framed to 17 inches by 19 ½ inches, also gaveled for $3,321.

Neue Auctions will follow this sale with an auction featuring the lifetime collection of Asian antiques and decorative objects of Dr. Marvin Drucker on Saturday, June 25th; and the lifetime collection of rare and exquisite Moser glass pieces of Carol and Leslie Gould on Saturday, July 30th.  Both events will be online-only, per usual, and will start promptly at 10 am Eastern time.